I realise why Devon’s Tory leaders are resigned to a train-crash Brexit – after 8 years of austerity, they just want to ‘make whatever comes down work’, however bad it is for everyone 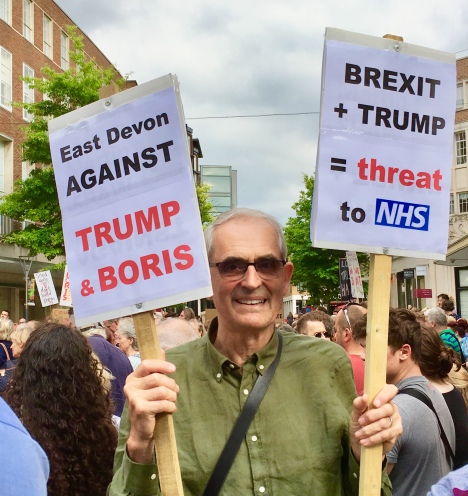 Following the chaos in Westminster over the UK’s customs relationship with the EU, and the Government’s cave-in to extreme Brexiteers who want the country to crash out – even if that means turning Kent into a giant lorry park, risking our food and medicine supplies and renewed violence in Northern Ireland – Devon County Council discussed the customs union last Thursday.

To a man and woman, the Tories opposed the Council expressing a view. While the Leader, John Hart, recognised the mess in London, he said it was not our job to try to influence Government. ‘We know we’ve got to make whatever comes down work. That’s the important bit for us’, he said. At that moment I realised that the local Tories’ complacency towards Brexit is exactly the same as their attitude to the austerity of the last 8 years. However bad it is for the Council’s services and the people of Devon, for our Conservative councillors, Brexit is another just another stage in our inexorable decline which they have to manage.

Cllr Hart reminded the Council that 6 Devon districts voted for Brexit, and only 2 against. True – but no one voted to leave the Customs Union, since it wasn’t on the ballot paper, wasn’t part of the Leave campaign, and no one knew what it was when they voted!

Photo: me at the anti-Trump demonstration in Exeter ten days ago. Boris Johnson and Jacob Rees-Mogg want a Trump trade deal, but that it is likely to involve US healthcare and pharmaceutical firms taking getting their hands on our NHS.

This entry was posted in Uncategorized and tagged Brexit, Trump.

One thought on “I realise why Devon’s Tory leaders are resigned to a train-crash Brexit – after 8 years of austerity, they just want to ‘make whatever comes down work’, however bad it is for everyone”

The Brexit referendum was perhaps the least democratic vote in recent times:

1. We were promised that we would continue to have access to the single market and stay in THE Customs Union (not A customs union), would get £350m for NHS as a “Brexit Dividend” and that leaving would be simple (whereas it is anything but). In other words a Soft Brexit with a big economic dividend. These were quite simply blatant lies by Farage, Johnson, Gove, Davis et al.

2. The Leave campaigns have been proven guilty of election fraud by overspending. They first took advantage of a loophole which allowed them to have two separate campaigns each with its own spending limit (giving them twice the funding of Remain), but then made a secret (and illegal) agreement to cooperate. Then they joined forces with a third campaign in order to spend even more money illegally – and this was overseen by a committee which met on a daily basis and included many of these same politicians (i.e. Johnson, Gove and Davis).

Let’s be clear about this – these are no longer simply allegations – they are a legally binding judgement by the independent body tasked with overseeing the fairness of our elections and referendums. A winning athlete found guilty of using performance enhancing drugs is immediately disqualified as a drug cheat and the result overturned – but apparently the consequences of cheating in a referendum is to be promoted to a ministerial role and being allowed to get off scot free.

Then there was a highly dubious financial contribution by the DUP which appears to have been rewarded by giving them £of OUR money 1BN in order to gain their support after the last election. Not to mention the likelihood of Russian funded interference / influence designed to create disruption and dissent in Europe.

3. The majority of the press was biased in its reporting during the referendum campaign (e.g. by practically ignoring the entire campaigning undertaken by the Labour Party) – this is fact as proven by several independent academic studies – and some factions have decided to trash democracy since by e.g. by bringing the legal system into disrepute by trashing judges who were only upholding the rule of law and allowing the government to be held to account.

4. Yet, despite all of the above, the Brexit vote was only marginally on the side of leaving the EU.

5. Immediately after the Brexit campaign was announced, Johnson, Gove, Davis et al. changed tack and started demanding a Hard Brexit. Since then they have done everything they can to prevent any sort of compromise deal, and appear hell bent on us leaving the EU without a deal at all – an ultra-hard Brexit that is the most extreme possible outcome and the furthest from the Soft Brexit that these same politicians promised us. There is no mandate for a Hard Brexit – it was not on offer in the referendum, and so not a single person actually voted for it.

6. The lies continue on a daily basis – Brexiters continue to talk about “the country” wanting a Hard Brexit despite no evidence supporting that position, whereas there is a growing base of evidence that the populace is starting to understand that the process has been abused.

7. The quality of debate on what is probably the most important decision for the UK since the 1970s is abysmal – because Brexiters and standing on dogma and refusing to discuss the details, refusing to accept the consequences and refuse to compromise even a millimetre. Democracy is in part defined by debate; without debate there is no democracy only Kepple’s rule – “he who shouts loudest gets” with the people with the deepest pockets able to shout loudest. As ever, it is apparently the rich few who are controlling this process not the real people of the UK.

Put simply – this is not Democracy – this is a highjacking of democracy by a small group of elite businessmen and politicians who are doing it for their own personal gain.