Scandal of fundamental changes to Devon’s NHS, which open door to large-scale privatisation, pushed through without public discussion – I have put them on the agenda of next week’s Health Scrutiny Committee

Devon’s two Clinical Commissioning Groups (CCGs) are pushing ahead with far-reaching, highly controversial changes to the NHS in the County from 1st April – without alerting the public or even the public watchdog, the Health and Adult Care Scrutiny Committee at Devon County Council.

The changes will turn the Sustainability and Transformation Plan – which itself grew out of the misnamed ‘Success Regime’ which closed our community hospital beds – into a more permanent Devon Accountable Care System. The first phase, in the first part of the financial year 2017-18, will develop integrated delivery systems, with a single ‘strategic commissioner’ for the whole county.

However the real concern is the next phase, which will lead to the establishment of Accountable Care Organisations. These will lead to services being permanently financially constrained, limiting NHS patients’ options for non-acute conditions, and pushing better-off patients even more towards private practice.

Large chunks of our NHS will be contracted out for long periods, probably to private providers. The ‘toolkit’ for this fundamental change talks about ensuring ‘that there are alternative providers available in the event of provider failure’. In the aftermath of Carillion, do we really want most of our NHS contracted out to private firms?

Devon’s public are not being consulted about this change – unlike in Cornwall where the Council has launched a public consultation – and there is no reason to believe that they want a privatised, two-tier health system.

Devon’s CCGs have pushed the change through without publicity, and it is only because I have put it on the agenda that Health Scrutiny will have a chance to discuss in advance of April 1st. I have written a 7-page paper for the Committee outlining what we know about the ACS and posing eight questions which they should ask about it.

Dr Graham Winyard explains. He is a former medical director of the NHS and deputy chief medical officer, and one of the people behind the crowdfunded legal action against ACOs.

This entry was posted in NHS and tagged Accountable Care Organisations.

Three leading Devon emergency clinicians, from different hospitals, are among doctors from 68 hospital trusts across England and Wales who have signed an urgent letter to the Prime Minister saying “the current level of safety compromise is at times intolerable, despite the best efforts of staff.” They demand more hospital beds and more money for social care.

They are Ann Hicks, Plymouth Hospitals Trust, Liam Kevern, Northern Devon Healthcare Trust and Nick Mathieu, Torbay and South Devon Foundation Trust. No one from the RD&E signed the letter – but does this mean that things are OK there?

This entry was posted in NHS and tagged A&E, NHS.

Progress on traffic calming in Colyford and Seaton Down Hill – MP, councillors and police thrash out solutions with Community Speed Watch teams and residents

On Friday I chaired a meeting in Colyford in which interested parties discussed solutions to problems of speeding in the village and on Seaton Down Hill. Those present including Cllr Stuart Hughes (Cabinet member for Highways) and officers, Superintendent Elaine Hartley (Speed Watch Co-ordinator Peninsula Road Safety Partnership) and other police officers, Neil Parish MP (who had chaired two earlier meetings which had brought everyone together), and representatives of Colyton Parish Council and Seaton Town Council. In a lively meeting, progress was made including:

The meeting was also a landmark get-together of local Community Speed Watch teams. Teams from Rousdon, Wilmington, Knowle, Ottery St Mary and West Hill, as well as the Colyford and Seaton Down Hill teams who organised the meeting, were present, and were unanimous in complaining about the slowness of police administrative procedures, the lack of data sharing, and uncertainty about how Highways and the police used Speed Watch results. Elaine Hartley acknowledged these problems and promised a meeting of teams from across Devon and Cornwall in the coming months.

Seaton’s tourism signage scheme gets go ahead at last

Devon County Council Highways has finally signed off the scheme for over 30 new tourism and traffic signs which the Town Council has been negotiating for over a year. The scheme will mean that new attractions like the Wetlands and Seaton Jurassic are finally properly signposted. The scheme has been carefully integrated to make everything easy to find for visitors coming into the town, and should be implemented this spring before the main tourist season.

People often complain about the Town Council but this scheme is a tribute to the persistence of councillors, who have brought partner organisations together and overcome difficulties in raising the full cost of the scheme. Devon County Council has contributed the majority of the £20,000 funding, and I have contributed £1000 from my County Councillor’s locality budget to help fill the funding gap.

This entry was posted in Uncategorized and tagged locality budget, signage, tourism.

SW bottom of the league for infrastructure spending – what do we get for having most of our MPs from the ruling party?

(from the Sunday Times) Britain does infrastructure well – 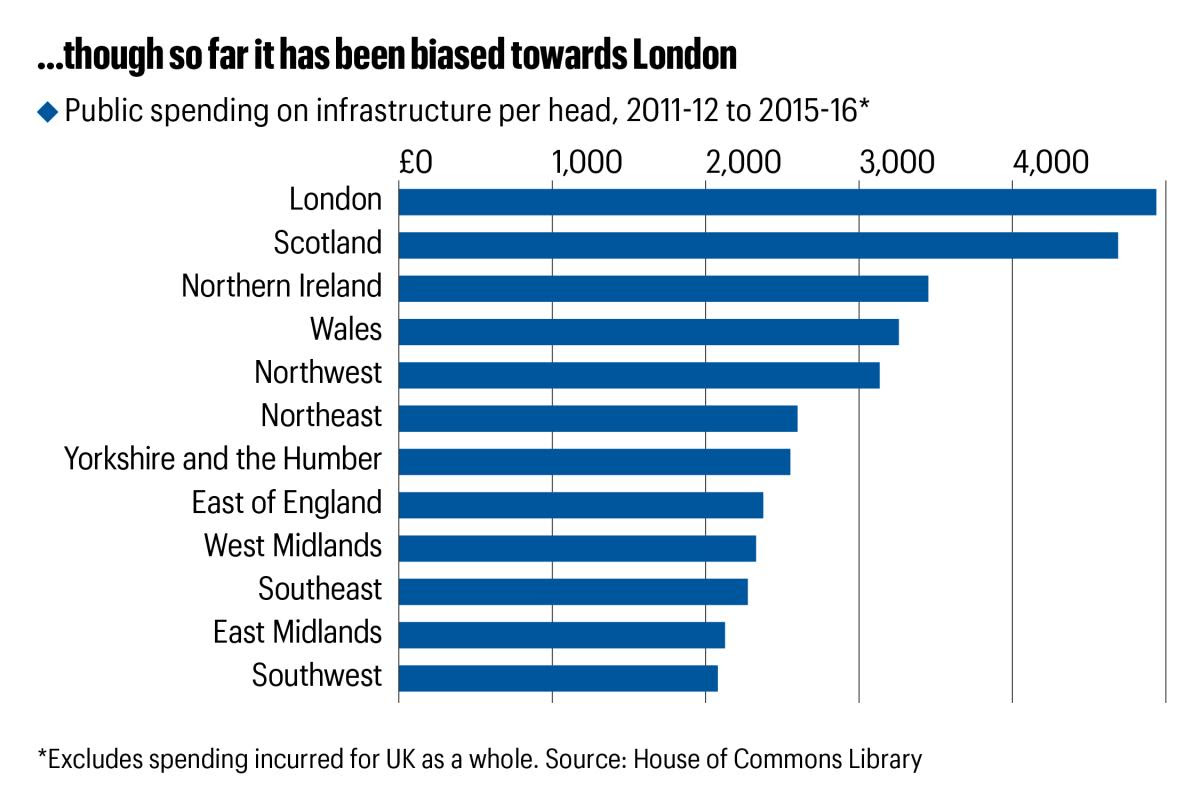 This entry was posted in Uncategorized and tagged infrastructure spending.

The timetable for the new service is here: 52 Seaton-Exeter 220118. I am disappointed that the service does not include Colyford and, at my instigation, DCC are talking again to Axe Valley about this.

This is still a minimal service. If you want a better service, use these buses and encourage the company to believe more journeys would be viable!

This entry was posted in Uncategorized and tagged buses, X52 Jurassic Coaster.

Coming to a site near us before long? Hospitals knocked down to build houses which nurses can’t afford

Four out of five homes built on former NHS sites that have been sold off to private developers will cost more than nurses can afford, according to new research.

Fifty-nine NHS sites, including many former hospitals, have already been sold to housebuilders as part of the government’s public land sale programme to boost housing supply. But the large majority will be unaffordable to nurses, according to the New Economics Foundation (NEF) thinktank. It found that in London none of the homes will be in reach.

Neither are the new developments adding much to the supply of affordable or social housing, the NEF found. Across the UK, only one in 10 of the homes built on the sold-off NHS sites analysed will be available at social rent. The average sale price is expected to be £315,000 – 10 times a nurse’s average annual salary.

The Royal College of Nursing has previously warned that high housing costs could force 40% of nurses out of the capital by 2021. For newly qualified nurses the price of a typical first-time-buyer home is 16 times their salary in inner London, seven times in the West Midlands and six times in the north-west of England, the RCN said.

In Colchester, Essex, the former psychiatric hospital Severalls is being transformed into more than 700 homes, none of which will be affordable to nurses and only 87 of which are classed as “affordable”, the NEF research showed. In St John’s Wood, north London, an NHS site has been sold to developers building three five-bedroom homes expected to cost around £3.75m – 121 times a nurse’s annual salary. There will be no affordable housing.

Persimmon, whose chief executive, Jeff Fairburn, is in line for a bonus worth over £100m, is developing the site of Pontefract general infirmary in West Yorkshire with 117 homes, only seven of which will be social or affordable housing. However, the prices are mostly below £200,000.

The report, No Homes for Nurses, estimated it would take a midwife over a century to afford the deposit for a market-rate home in Enfield where Chase Farm hospital is being redeveloped into 138 residential dwellings. Only 19% of them will be affordable, despite the borough having a target of 40%.

“These NHS sites are community assets – they should be used to deliver community benefits,” said Joe Beswick, housing lead at NEF. “Public land, which is owned by all of us, is being flogged off to developers so they can make massive profits, while producing a tiny amount of affordable housing.”

“This is a government with the wrong priorities on housing,” said John Healey, Labour’s shadow secretary of state for housing. “Ministers should be maximising the number of new genuinely affordable homes on public land, not treating low-cost housing as an afterthought.”

The government has identified surplus Department of Health sites with capacity for 26,000 homes. Between 2015 and 2017 it was expecting to sell sites for 4,000 homes.

In November, the government announced nurses would have first refusal on affordable housing generated through the sale of surplus NHS land. But the NEF argued that in London even affordable rent, which can be as high as 80% of market rent, is not affordable for nurses.

A government spokesperson said: “Since April 2010 there have been more than 357,000 affordable homes provided in England, but we’re aware that more needs to be done, which is why we’re investing over £9bn in affordable housing.

“For NHS staff in particular, we announced plans in October last year to give first refusal on affordable housing schemes built on NHS land sold for development.”

This entry was posted in NHS and tagged affordable housing, hospitals.

This entry was posted in Uncategorized and tagged CeramTec, Colyton.