It’s nice to be able to end the year by reporting a success. The Seaton and Colyton Medical Practice have informed me that their landlords, NHS Property Services, have reduced the service charges for Colyton Health Centre to a reasonable level and the dispute has been settled, thanks partly to the public pressure I put on at the Health Scrutiny Committee.

Colyton Primary School parents don’t share Ofsted’s view that it is ‘inadequate’ – and oppose forced academisation. I am supporting them and have written to the Regional Schools Commissioner 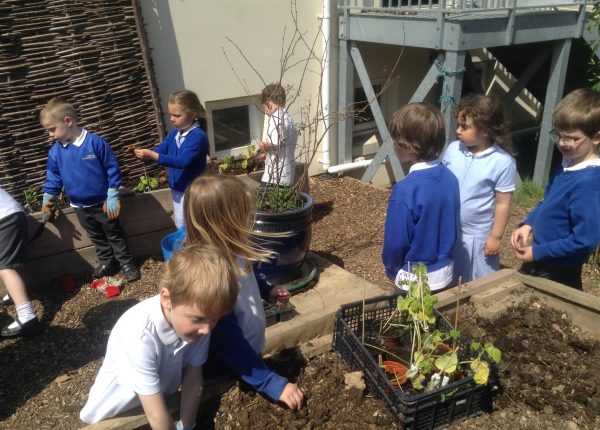 Ofsted has published a report on Colyton Primary School and has graded it ‘inadequate’, ‘particularly for pupils with special educational needs and/or disabilities (SEND)’, although other significant failings were also identified.

I attended a meeting of 70 parents at the school last week, addressed by a representative of the County Council and the new Chair of Governors (the previous governors resigned). There was a general view that, while the support for some SEND children may have been inadequate, the school was generally doing much better than the Ofsted report suggested, and that specific managerial problems had led to the key problem which they identified.

In view of the ‘inadequate’ grading, the County will (following procedures) quickly bring in a Multi-Academy Trust to manage improvements in the school. I have asked to be kept informed on what is happening.

Parents were very concerned, however, that, legally an ‘inadequate’ grade means that the school should be permanently transferred to a Multi-Academy Trust.

Parents have established a Facebook group to oppose academisation. I am supporting them and have written to the Regional Schools Commissioner, who will be responsible for overseeing the academisation process, to express my opposition.

Research by parents has shown that many academy orders have been revoked following parents’ opposition. I do not believe that specific managerial issues justify a wholesale privatisation of this community school. I am confident that the parents can prevent this happening and that the community will support them.

You can view the site here and the free journalism training is here.

Claire Wright achieved the best result for an Independent anywhere in the UK, far better than the former Conservative and Labour MPs who stood as Independents

Devastating results, but not ‘irrefutable’ support for Johnson’s policies on Brexit or anything else: the majority voted against him

The election results are devastating for hopes of change both nationally and in East Devon, where Claire Wright (above) was defeated despite gaining nearly 26,000 votes. Yet Johnson’s victory is not based on winning a majority of voters (the Tories won 43.6 per cent of the vote) nor is it ‘irrefutable evidence’ of the will of the British people for his Brexit. On the contrary, 16.7 million people (51.8 per cent) voted for parties which support a 2nd referendum, and only 14.7 million (46.4 per cent) for parties which support Johnson’s ‘deal’.

The explanations for these discrepancies are our disproportional electoral system and the uselessness of the leaders of the Labour, Liberal Democrat and Green parties (and the ex-Tory Independents) who failed to unite sufficiently either in the last Parliament or for the election. I’m pleased that Swinson has gone and Corbyn is also on his way out.

We are now stuck with a Johnson ‘elective dictatorship’ for 5 years. If you have to wait too long for NHS treatment, if your fire station is closed or your children’s school academised against your wishes, you will know who to blame (and that will include yourself if you voted Tory). You are going to need opposition politicians, especially Independents, more than ever.

Ten LOCAL reasons to vote AGAINST the Conservatives today 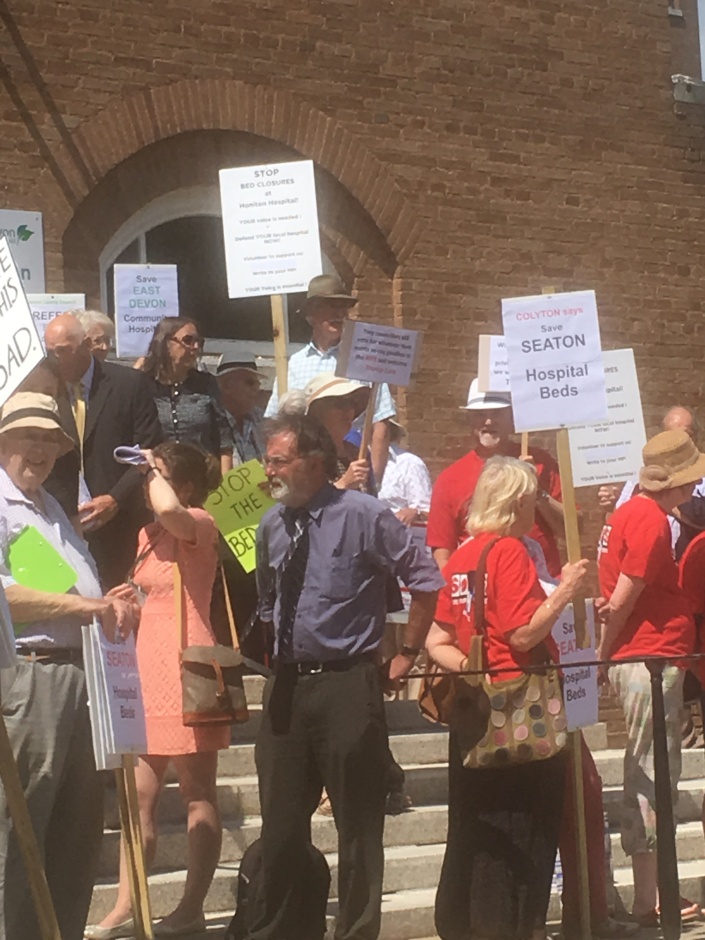 In East Devon, vote for Claire Wright (Independent), in Exeter for Ben Bradshaw (Labour), in Totnes for Sarah Wollaston (Lib Dem), who are candidates who can clearly beat the Tories. In Tiverton & Honiton where the Tories are unfortunately safe, vote Labour, Liberal Democrat or Green to show the Tories they can’t take us for granted.

I’m sorry I restricted myself to 10 points. Anyway, I’ll sneak in an extra one … local Tory candidates have lied, Neil Parish about Seaton Hospital and Simon Jupp about funding for Exmouth town centre and Sidmouth beach management … just like their leader.

It’s been suggested that ‘Hugh Grant voters’ – who vote tactically – could deny Boris Johnson an overall majority, such has been the effect of Hugh’s heroic campaign to support the candidates best positioned to defeat the candidate of the new ultra-hard-right Tory party.

Over 200 supporters gathered at an hour’s notice in Sidmouth today, as Hugh came to urge opposition to the ‘most dangerous leader any of us have seen’ in British politics. (Anyone want to help leaflet for Claire in the next 2 days? Phone, text or email me.) 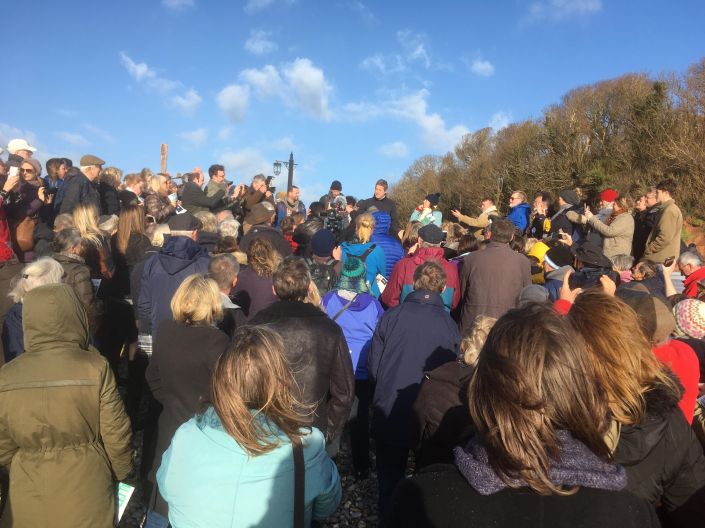 Yet again, Devon Conservative councillors block discussion of Colyton, Topsham and 7 other fire stations which are likely to be closed, once the Tories have got a majority 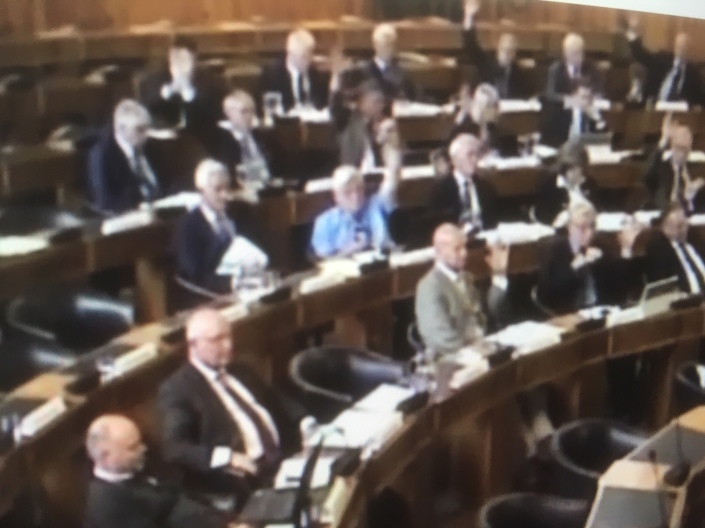 At Devon County Council yesterday, Tory councillors voted as a block to prevent my motion critical of the fire station closures from being discussed at the meeting. They also voted not to allow the vote to be recorded, to protect themselves from criticism. (My picture shows them voting the first time they did this, in October. Yesterday’s webcast is not available to take a still from.)

The meeting of the Fire Authority which will finalise the closures has been postponed until January 10th, and the proposals which will be put to the Authority will not be published until after the election.

Make no mistake – the closures will almost certainly go ahead unless voters throw a spanner in the works!