Seaton Hospital was built thanks to the local community 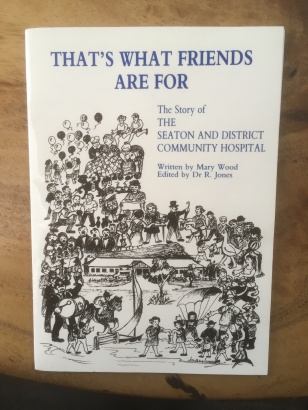 Ted Gosling has lent me this booklet published in 1991 telling the story of the foundation of the Seaton and District Community Hospital (it must be in the Library?). The Seaton, Beer and Colyton community raised a third of a million pounds, about £1 million in today’s money, and was matched £ for £ by the Health Authority. Of course, the League of Friends has carried on raising money ever since.

Ted tells me that the campaign for the hospital in the 1980s stands alongside the defence against German invasion in 1940 as a rare moment when the whole Seaton community came together. We need to do the same for the hospital’s in-patient beds. Morally, the hospital belongs to us, not NHS Property Services!

This entry was posted in NHS and tagged Seaton and District Hospital League of Friends, Seaton Hospital.

You state: Morally, the hospital belongs to us, not NHS Property Services!

Possibly more than ‘morally’?
Do we have any information on the original setting up of our Community Hospital regarding any statements relating to tied or part ownership by Seaton?
At the least, can we not get some of our money back??