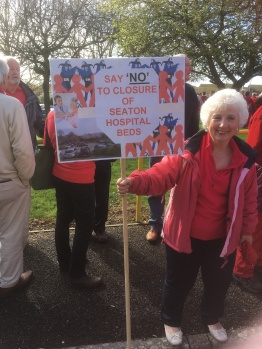 Campaigners in the Seaton and Honiton areas are preparing for a crucial meeting of Devon County Council’s Health Scrutiny Committee on Tuesday 25th July. Following a meeting in June when they postponed a decision, this committee will now decide whether to use its power to refer the decision of the NEW Devon Clinical Commission Group (CCG) to close all in-patient beds in Seaton, Honiton and Okehampton hospitals to the Secretary of State for Health.
In March, the Committee sent the CCG 14 questions, from a resolution proposed by County Councillor Claire Wright, about the proposals to replace 72 of East Devon’s 144 community hospital beds by care at home. Cllr Wright and other committee members are expected to examine the 14 points in detail to see which of them the CCG has answered satisfactorily.
The questions included the justification for the surprise last-minute switch of beds from Seaton to Sidmouth, which left no beds at all in the Axe Valley, since Axminster has already lost its beds.
Among those who will be speaking against the plans are Seaton Mayor, Jack Rowland; the Chair of EDDC’s Scrutiny Committee, Councillor Roger Giles; Steve Craddock and Bob Sturtivant from Honiton; and myself.
This is a crucial decision not only for the beds but also for the future of the hospitals. The CCG’s next step is its local estate strategy, which may involve partial or even complete closures of hospitals. Seaton is more remote from acute hospitals than any other East Devon town and it is vital that we retain our hospital, which was built by the local community in Seaton, Beer, Colyton and the surrounding area.
As in June, protestors will gather outside County Hall from 1 pm, and will then observe the meeting which starts at 2.15. A bus is being organised to take people from Seaton to County Hall: anyone who would like to book a seat should contact me cllrmartinshaw@gmail.com or 07972 760254.
The many emails sent to committee members in June had a real impact. Here are their addresses if you’d like to write again:
sara.randalljohnson@devon.gov.uk;
nick.way@devon.gov.uk;
hilary.ackland@devon.gov.uk;
john.berry@devon.gov.uk;
paul.crabb@devon.gov.uk;
rufus.gilbert@devon.gov.uk;
brian.greenslade@devon.gov.uk;
ron.peart@devon.gov.uk;
sylvia.russell@devon.gov.uk;
philip.sanders@devon.gov.uk;
richard.scott@devon.gov.uk;
jeff.trail@devon.gov.uk;
phil.twiss@devon.gov.uk;
carol.whitton@devon.gov.uk;
claire.wright@devon.gov.uk;
jeremy.yabsley@devon.gov.uk;
pdiviani@eastdevon.gov.uk.