The majority of people in the Seaton and Colyton area, and Devon as a whole, voted for Brexit. But they did not vote to make themselves or the country poorer. At Devon County Council yesterday, the Cabinet gave their response to a motion I submitted supporting staying in the Single Market and Customs Union, which would be the best deal for Devon’s exporting companies, farmers, universities, tourism industry and especially our NHS.

However the Cabinet took out all references to post-Brexit options and just said they would assess the ‘opportunities and impacts’ of Brexit. I then proposed an amendment that the County Council should lobby government for the least damaging Brexit trade and migration deal. In the end, every single Conservative councillor voted against this – some, I’m pretty sure, against their beliefs – although Lib Dem, Labour and other Independents supported it. You can WATCH THE DEBATE HERE – FORWARD TO 3:38 FOR THIS RESOLUTION.

Neil Parish seems to have gone AWOL on this issue, along with all Devon’s MPs except Conservative Sarah Wollaston and Labour’s Ben Bradshaw. So all the more important that the County Council should speak up loud and clear for the post-Brexit deal which will best safeguard Devon’s economy.  Unfortunately DCC’s Conservatives put party unity and loyalty to the Government before the interests of Devon. 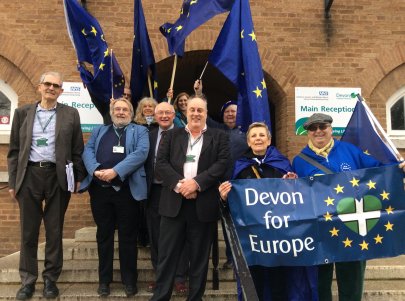 I’m pictured here with other councillors and DEVON FOR EUROPE supporters attending the meeting. Anthea Simmons (second from the right) gave an excellent speech in the public speaking session.

This entry was posted in Uncategorized and tagged Brexit.