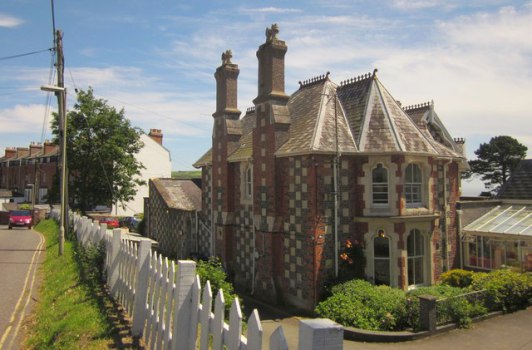 East Devon’s Development Management Committee (DMC) today approved a new extension to the Check House, the iconic house (named after its distinctive brickwork) which is now a care home.

Built by Sir Walter Calverley Trevelyan and Lady Pauline Trevelyan – the key figures in Seaton’s transformation from fishing village to seaside resort – in 1866, the Check House has a fine clifftop setting overlooking Lyme Bay. Yet this crucial part of Seaton’s heritage has long been compromised by the planners and councillors of East Devon District Council (EDDC). Large extensions were allowed in both its front and rear gardens in 1992 and 2004 respectively to serve its new role as a care home.

Last year a new proposal was approved for both an extension off the earlier rear extension, together with a ‘Victorian’ conservatory and greenhouse along the north side facing Beer Road, on the left hand side of the house in the picture above.

The earlier extensions, while partially spoiling the site and followed by the transformation of much of the garden into car parks, at least had a similar checked pattern to the original building. The small new extension which has been built (just off the right of the picture) onto the earlier rear extension is, however, an eyesore, completely out of keeping with both the Check House and the original extension.

The owners decided, however, not to build the approved conservatory and greenhouse, which – while spoiling one of the unspoilt sides of the original building – did at least nod towards its Victorian character and would have had a lighter impact because of the large amount of glass involved. Instead they asked to put a solid extension, without the original check pattern, where the conservatory would have been. This was to allow yet two more bedrooms so as to maximise income from the site – although of course residents will no longer enjoy a conservatory or greenhouse.

EDDC has now approved this proposal, despite the opposition of ward councillor Jim Knight, the Town Council (which I represented at the DMC) and local residents (represented by Steve Read). Steve and I mentioned, of course, the important fact that the Check House already has completely inadequate car parking and its staff and visitors’ cars spill out on to Beer Road where they cause problems for traffic – so this development will add to the problem.

Most disturbing, Planning Officer Chris Rose’s photographic display which preceded the discussion showed not one photograph of the original house, let alone of the sides affected by the proposal which are shown above. This was truly shameful, as was the lack of care of the committee.

Readers will recall the much-criticised decision of East Devon’s Development Management Committee (DMC) on 8 September, to approve the replacement of Pendeen, a bungalow on Castle Hill, with a block of flats. This reversed a majority decision in April to refuse a very similar proposal for the same site. Addressing the DMC as an objector, I urged it to ‘be consistent’ with its earlier decision.

The committee ignored this plea. Officers, whose advice to approve the application had been overruled in April, advised approval again, and some Councillors who had supported the application in April supported it again. This was not primarily because of the minor changes to the application;  both appeared to disregard the actual decision. Indeed Councillor Alan Dent even responded directly to my ‘consistency’ appeal, saying that he was being consistent – but with his own earlier opinion, not the previous decision of the Council.

The apparent disregard of both officials and councillors of the previous decision of the Council raises serious concerns in the light of minute 30 of EDDC’s Audit and Governance Committee (19 November 2015), ‘Risk management review: half-year review’, which states:

“In the full risk register there was one risk currently scored as high:

“An aggrieved party had recently been given leave by the High Court to pursue a judicial review against a decision of the Council to grant permission for a dwelling on land adjoining their property. The case revolved around whether Members of Development Management Committee in making the decision were consistent in their approach with prior decisions on the same site for a similar form of development. Members of DMC had been briefed on this case and these issues would be picked up through future Members training sessions.”

The 6-week period in which Pendeen objectors could have applied for judicial review has unfortunately expired. However 3 questions remain:

Consistency with prior decisions is also a big issue in the current application (15/2395/FUL) to build 3 houses in the garden of Pembroke House on Beer Road, as the objection lodged by Charlie Hopkins on behalf of myself and 9 other neighbours (on the planning portal) explains in detail. This will be a good test of whether the DMC can achieve the ‘improvement’ which the Audit and Governance Committee sees as necessary in planning decisions.

(Thanks to East Devon Watch for drawing attention to the minutes.)

This entry was posted in Uncategorized and tagged EDDC, EDDC DMC, Pendeen.

The battle for Pendeen, the modest but attractive seafront bungalow on Castle Hill which its owner wants to replace by a block of 3 flats, was lost at East Devon’s Development Management Committee yesterday. The DMC had refused a very similar application in April (by 7-6), but the same committee has now approved the replacement (6-4, with three Independent members unfortunately absent).

Seaton’s voice was once more unanimous: Marcus Hartnell for the town council, his fellow district councillor Jim Knight, Pendeen neighbour Jean Hoskin, and myself for the many individual objectors, backed up by Peter Burrows on the committee, all opposed the application, but we were overridden by Tory councillors from other areas.

How could local opinion be so ignored, and the committee’s own recent decision be set aside? The simple answer is that planning officers, who supported the original application but were overruled by the majority of members, provided ammunition for councillors supporting the bid to overturn the first decision.

Two disturbing distortions in the officers’ case were highlighted by councillors who opposed the application. First, they quoted the National Planning Policy Framework’s paragraph 60 to the effect that we ‘should not stifle innovation, originality or initiative’. However Councillor Mike Allen (Conservative, Honiton) objected that they had omitted the conclusion to the NPPF paragraph: ‘It is, however, proper to seek to promote or reinforce local distinctiveness.’ Allen said that he did not appreciate officers quoting selectively to buttress a particular case.

Secondly, the officer in charge repeatedly displayed a photo, originally produced by the applicant, labelled to show the proposed flat-roofed block together with two other flat roofs in the view from Seafield Gardens. Peter Burrows twice pointed out that there were no photos provided at all from the public viewpoints (Coastal Path, Cliff Gardens) that would be damaged by the building. (Moreover the photo that was highlighted by the officer had cut out the row of red-roofed houses on Castle Hill of which Pendeen forms part.)

How did the committee come to its decision despite these failings in the pro-application case being pointed out? The majority of members simply did not respond to either Allen’s or Burrows’ points, they did not respond to most of the objections made by the Seaton representatives, and they did not address point by point the 3 good reasons for refusal that their own committee had given as recently as April.

Mostly these councillors thought it sufficient to give their opinions: Councillor Alan Dent, the former Design and Heritage Champion, ‘liked’ the proposed building, his successor, Christopher Pepper, agreed with him without expanding his own view, and other members chipped in briefly before voting the proposal through.

The bias of the planning system

Why do councillors act like this? They are not simply biased against Seaton, as the same thing happens to applications from other areas. They are not necessarily corrupt (in the sense highlighted by the Graham Brown case).  The key, probably, is that they don’t want the trouble of appeals, highlighted as a danger by the officers in this case. Group-think does the rest: the Tories are happy to let individual councillors like Jim and Marcus speak for their constituents, and more independent minds like Mike Allen have their say, as long as the rest of them can vote us down.

We have no real redress against the Committee’s failure to consider the matter carefully or fairly. The applicant, if he had lost, could have appealed. Objectors can only seek judicial review – a right the Tory Government is trying to curtail – which would cost probably tens of thousands of pounds if EDDC spent taxpayers’ money to cover their own failings.

This entry was posted in Uncategorized and tagged EDDC DMC, Pendeen.