My last post but not least on yesterdays County Council meeting – it approved the budget and set an increase in Council Tax of 4.99 per cent.

As my Independent colleague Cllr Claire Wright explained in her speech, health visitors, funding for foster care, the schools counselling service, among others are to be cut, cut, cut – while an extra £5m is stashed away in reserves (because of the unreliability of the Government’s new wheeze of letting councils keep business rates as a partial substitute for central funding). 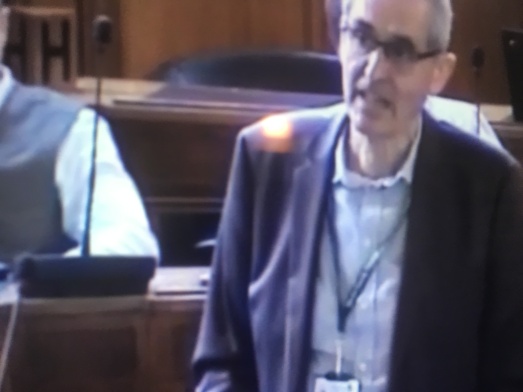 I pointed out that – while we all want to protect spending on the young, elderly and disabled – another year of huge rises in Council Tax (making 14 per cent in the last 3 years) will hit hard those managing on modest incomes.

As a colleague pointed out, Council Tax is an unfair tax and the way in which the Government is loading social care costs on to it is a disgrace.

I said you’d have thought that it would be good for Devon to have the same party running its council which runs the national government. Actually it’s the opposite – the Tory Government takes advantage of the Devon Tories’ slavish loyalty, and the Devon Tories let them get away with it.

YOU CAN WATCH MY SPEECH BY CLICKING HERE AND FAST-FORWARDING TO 1:56.

This entry was posted in Uncategorized and tagged council tax, Devon County Council.